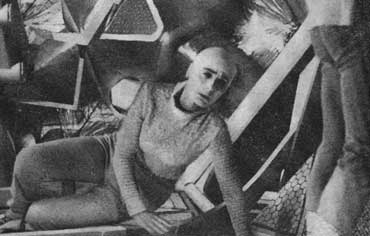 In The Machine Stops, E.M. Forster identified industrialism as our enemy. It operates by getting everybody to consume, ever more unto death; it takes away human purpose.

Forster must have seen the way the machine was linking itself together when he wrote the book in 1928. Humans were letting the machine take over – working full out for the machine in order to buy its products; labour saving innovations, manufactured opinions – giving comfort and reinforcing belief in the machine.

In Forster’s story people live underground, each in a cell where the machine can control them in exchange for comfort: no real work, seeing nobody in the flesh; they live in virtual reality – leisure provided – pressing buttons and communicating on Skype.

Knowledge doesn’t exist. Because no direct source or contact – no argument or confrontation with others and with life. They think only of ideas. Ideas are given as tenth-hand lectures on screen – somebody’s opinion about somebody’s opinion…

We have made this choice; there are parallels. If the machine stops we’re dead. But our machine also has a parasite which sucks the money out of it just for a few rich – Rotten Financial $ystem (Rot$) which is designed to create war, poverty and climate change (CC).

When the machine is stopping, people still believe in it and they make excuses for it. It’s the same today, e.g people say ‘the machine can’t manage the NHS because of the ageing population’ – of course we can afford it if we can afford Trident; in the first half of the 20th Century economist John Maynard Keynes was sure we could afford it. He thought we would be able to work only a fraction of our time and the rest would be leisure – presuming we had a fair distribution of wealth. In The Machine Stops hardly anyone needs to work, the machine is content with power and submission – people do nothing until it stops.

Fantasy: the machine can do everything. (In the story, you press a button if you are ill and medical apparatus comes down from the ceiling and sorts you out.). The Machine Stops should make us realise we’re right now trapped in a fantasy. (Stop believing – e.g. US belief that the war machine brings peace via total control).

Machine worship = robots, alienation and death. Scientists, stop working for the machine, get the machine to work for us! But Rot$ will kill us before this.

In order to find a solution to Rot$ I made an analysis:

The solution reveals itself: the machine would kill us, but before that happens we will be killed by Rot$ = war, poverty and CC.

First step in achieving green economy is SWITCH to a green energy supplier. My team, working with NGO’s, charities, student groups and hopefully trade unions, are aiming to have half the UK SWITCH to green energy within five years. This will undermine the Rot$, it will be a catalyst for others to follow. (The US government subsidises the fossil fuel industry by $700billion per year. Tell Trump the green economy is our future, our only future.)

We’ve chosen to switch our electricity to Ecotricity: ecotricity.co.uk.