Sun 7 – Mon 8 Aug –  Lake Attersee:  Our friend Georg, who lives in Salzburg and had attended the festival with us, drove us to Attersee, a lake half an hour away. We met our friends Yasmine and Sabina and their friends and family. The lake is outside my window but on the second day I still haven’t been down there. I am finishing up the diary because the book has to go to press when we get back to London. We go back tomorrow. If Andreas comes for me I will go down; it’s about five o’clock.

WHAT DO WE NEED TO DO FOR CR IN THE NEAR FUTURE?

✸ I have applied to visit Leonard Peltier. I want to give him courage as he awaits the decision of Obama to set him free or not when he leaves office. My friend Lorna has made a film about the whole situation which led to Leonard’s wrongful conviction for the murder of the two young agents. It is an impartial film and shows that on that day people did not know that it would end in tragedy. She has talked to some of the FBI men who were there and she feels that they trust her. The hope is that freedom for Leonard means that people can feel more at peace and get on with their lives. Leonard’s lawyer is really good and the plea for release is most professional. Leonard has served his people by sticking to the truth and his principles. He has planned and paid for his funeral. On the rez.

✸ I plan an art exhibition including the children’s collage to raise money for rainforest and other charities.

✸ I did not finish the Politicians R Criminals campaign. There is still one more video to do. Having left it so long I don’t know when would be a good time to do it. Perhaps when I find the time to write the play about Faust. You see, this set of videos is a basic research for Faust. 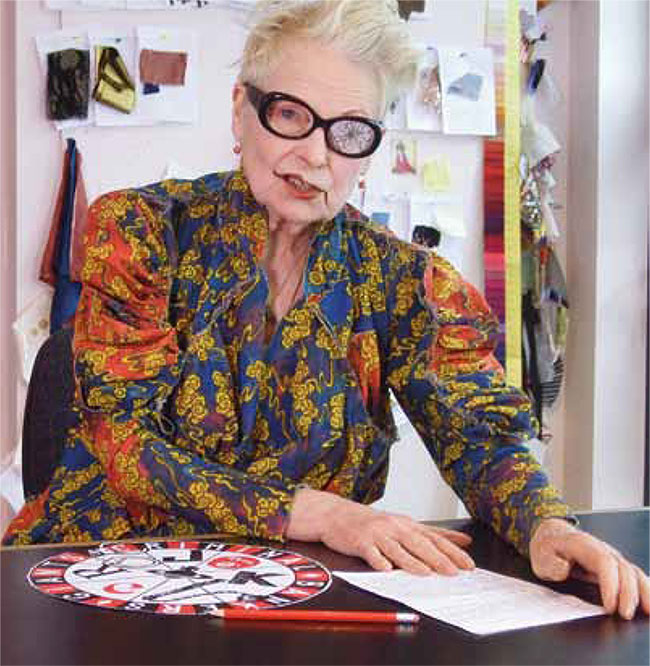 This is the fourth Politicans R Criminals video – me dressed as the Joker/Mephistopheles/the Press.

The game played by – politicians = CRIMINALS, monopolies = GIANTS, banks = FACELESS EVIL! I now refer to them all for convenience as the antipeople. The press support them and they are taking us to Hell on Earth.

• They belong to a club owned by the rich and powerful antipeople who control Rot$.
• They need the right reflexes to enter: Don’t think, simply reflex, ‘If it’s good for Rot $, it’s good for us.’
• Once they’re in, they stay – unless they start to think / empathise with Homo sapiens. They, too, will become rich.
• The same antipeople are always in power. Even after a revolution!Revolutions have never yet worked. The rich and powerful antipeople make sure that the same antipeople get back in.
• Today the antipeople control the media and enough people believe in Rot$ to win an election.
• Antipeople are not us. We try to think. We care about Homo sapiens.
• Like aliens they come from another planet. They ignore the real world and live on the planet they create: Planet Rot$. 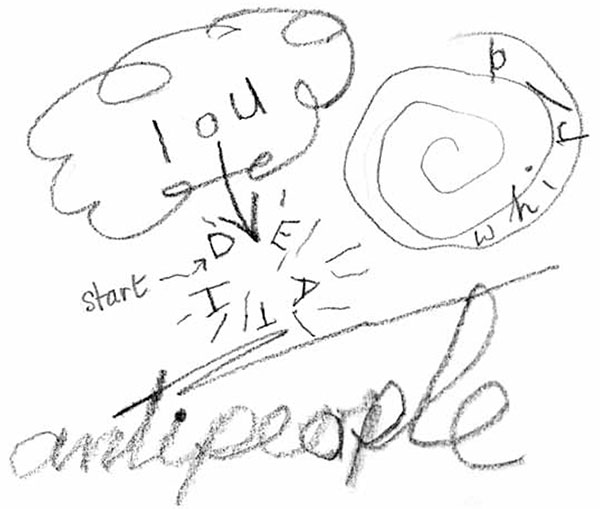 ✸ IoU. Climate Revolution is the motor of IoU. At this point student IoUs in six universities are working out how and what to discuss and act upon, so that the movement sustains: culture as well as activism; culture is activism. When ready, they spread to other colleges. There will be events in September at The Box and LSE for Resist Festival. 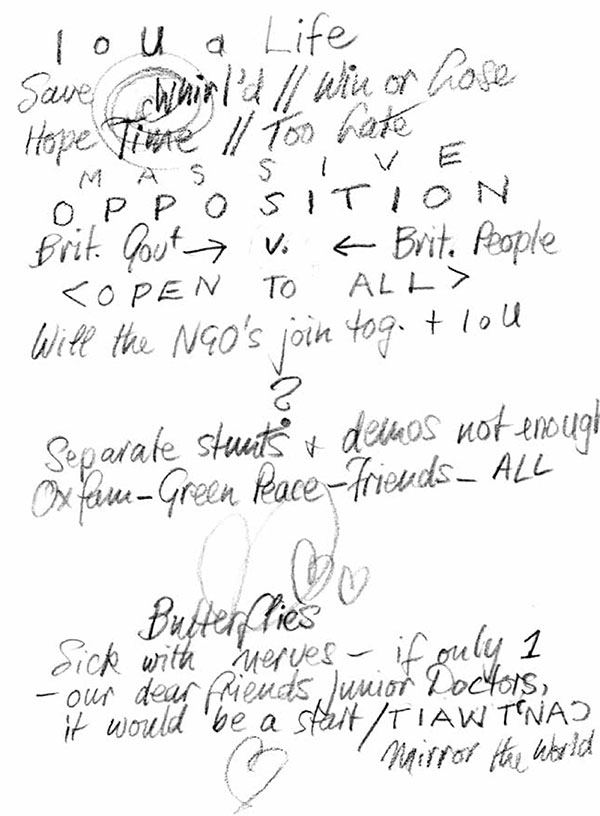 NGOs Unite! We have our websites. We can broadcast direct to social media and through news sites. A quarter of the mainstream media are intellectuals anyway. Come! We are open to all to join; so strong will we be. Everyone can engage with us, starting with celebrities, professionals, scientists and everyone who is desperate to stop the destruction and Get a Life. Here is a proposal draft of our first challenge. We have to work through government, put pressure on them to change policy. We will be strong enough to do it. There are many ways.

A LETTER TO THE NEW PRIME MINISTER

We are trying to focus, then build opposition – open to all – to the financial policies of your government. Globally a few thousand

antipeople control seven billion people.
We want to expose this, starting with Britain. In Britain at the last election let’s say 37 per cent of the electorate voted for the antipeople present government. Therefore, the majority do not agree with your political programme.
We are the opposition.
We are IoU together with Greenpeace, etc., etc.
We condemn Trident – cost estimates between £40 billion and £100 billion. The money could be spent on doctors and nurses – on the NHS. We ask the public to connect this colossal waste of money with the fact that austerity is not necessary, it’s a con.
Our economic system is designed to cause poverty and syphon off profit for the rich.
t is also the cause of climate change. Yet you have just shut down the Ministry for Climate Change.
Everything is connected, yet the press make sure we never get the complete picture; which causes confusion.
We challenge government dishonesty. We tell you: Address the facts. Demolish the problem you have created. The easy way out of this is the Green Economy.

GIVE THE COMPLETE PICTURE

✸ Many ways to clarify and build public opinion in accordance with the facts – give the complete picture:
✸ e.g. make the connections: ‘growth’ is the means by which the antipeople syphon off profit; according to the Rot$ the world is technically bankrupt, the state of the economy is measured according to what is good for investors. These are mostly bubbles, sold on like ‘passing the parcel’ – the one holding the parcel when the music stops goes bust.
✸ e.g. the terrific escalation of rise in temperature comes
not only from fossil fuels and their extraction but from desertification of land by Big Ag. and factory farming –release of methane (eighty times more potent than CO2) and all the other shit the GIANTS are doing.

ONE LAST THING
One last thing. Our friend Bertram just died, aged forty-nine. It took since the time of Queen Elizabeth I until now to make the connection between cancer and smoking. We have not made the connection between climate change and mass extinction but the antipeople accept it and continue the Rot$ which causes it.
Generally, we also accept it, it’s just part of coffee-bar chat. Perhaps the reason for this is our belief in the myth we live by. 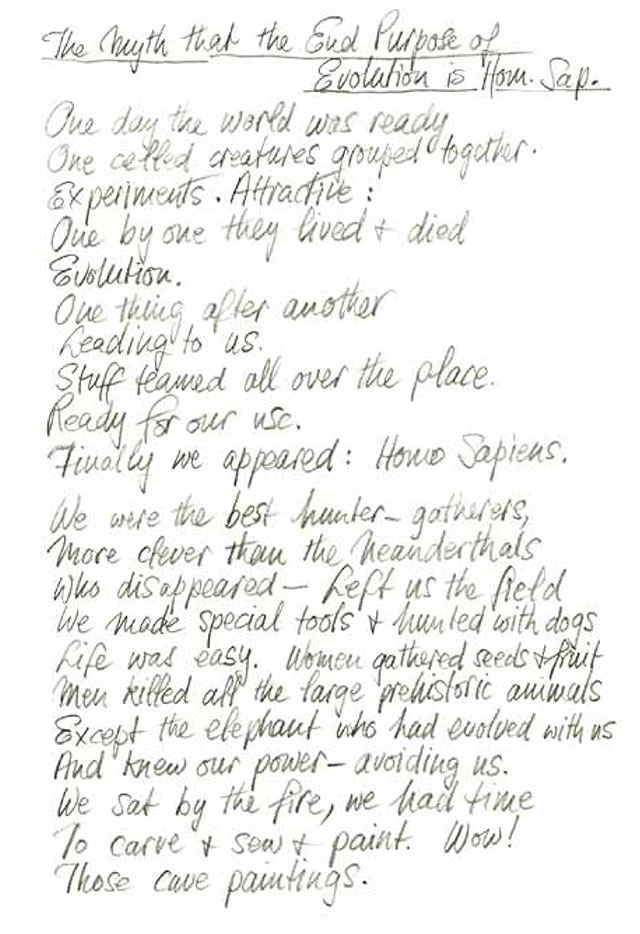 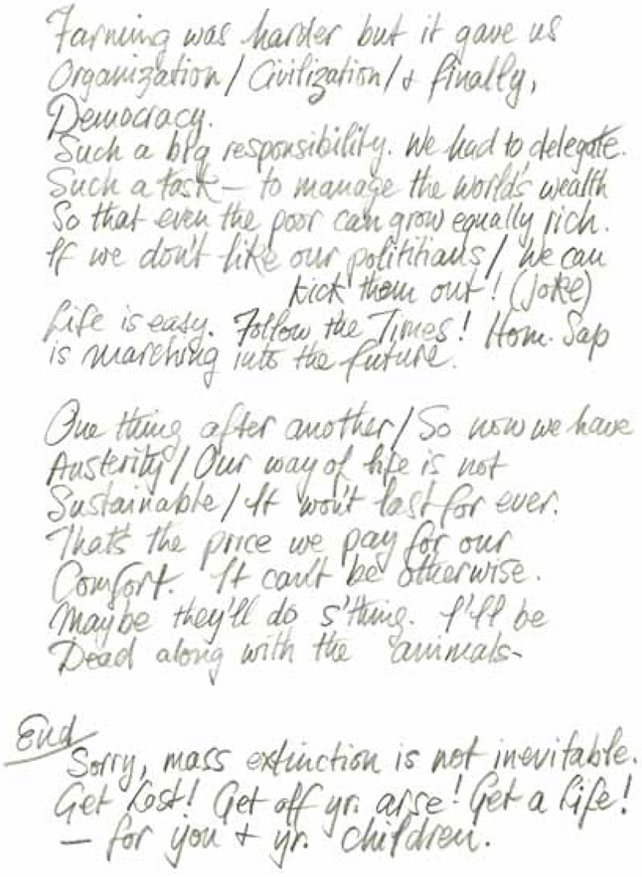 Mon 15 Aug –  Building the IOU movement!:
Here is the speech I gave to the NGOs at the IoU meeting:

This is about global political financialisation which gives governments power to do what they like and how the only credible opposition are NGOs. They can save the world from disaster and climate change. It is set out like a theorem; QED-Unite!
Think of the position we’re in – globally! Everything has become dramatically polarised.

Only the last has ever happened before on a global scale (end of the dinosaurs).
If we connect the dots of these five bullet points the problem we have created and its solution is staring us in the face:

✸ If a few control seven billion that is not democracy. (We know how they do it – by means of the political-economic system. Politicians are its public face.)
✸ The work of NGOs is not effective in opposing the financial policy of neoliberalism. Proceeding by the polarisation of wealth the policy creates poverty and causes climate change.

The answer to the problem is that NGOs and charities make real the power they have, speak with one voice. Unite! Only we can do it. Everything depends on us. Others don’t have time to build a global solution. We have already built it through our work. We are the solution. We just have to continue doing what we do, but do it together.

A solution is what people want. We will attract potentially everyone – intellectuals, businessmen, celebrities, people from all walks of life. We will tell truth through the social media. We have immense credibility. Britain is a good place to start. As things get worse our government is aggressively imposing policy which caused our problem in the first place.

We can achieve a Green Economy. That is the solution. 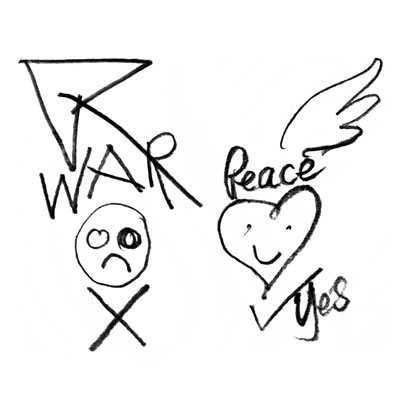 It’s the Olympics, which means the four-year anniversary of the launch of Climate Revolution. Time flies but we are trying to get somewhere. We are holding an IoU meeting. I have some hope that the NGOs and charities will unite. John Sauven, who is head of Greenpeace UK, is nothing if not practical. He tells us that we already have an affiliation of NGOs (including the trade unions!) in the Climate Coalition. We are members, too; I had forgotten. Its potential has not been tapped. He’s going to try something. I know Cynthia will also work on this. Once IoU becomes more solid then it is united with the most powerful UNIT in the world –

the NGOs. John is so full of knowledge, he must have made a lasting impression on the student IoUs. (A fact he noted: when recently the government pulled the small subsidy on renewable energy, yet subsidised the fossil fuel industries by £30 billion, 12,000 solar jobs were lost yet the press never mentioned it. It was the same number of jobs we just lost in the steel industry, where the press made a fuss.)
We want the IoU movement to become as big as the hippies. (Make love not war.) But it has to sustain and the way it will do that is if it is anchored to the pursuit of art and culture. It takes commitment to read a book (you get out what you put in). The movement has to come together in each university as a club with regular meetings and I suggest as a practical linchpin that they begin meetings by reading the current diary entry.
Sow the whirlwind / Reap the whirlwind.
Everything is connected. War is connected with climate change. War is part of the fact that a few thousand control seven billion.
Perpetual death and destruction is caused by the war industry and the neocons (conservatives) who support Hillary Clinton.
This looms over our solution to save our world. Nevertheless the solution is in the practise.