Last night Vivienne spoke to intellectuals at King’s College, we’re starting IoU in the colleges and it’s spreading. King’s College was especially important because Tytus has already started an environmental movement there, Eco Soc, which we can build on.
Cindy is in there building the movement. If I go in there and nail the message then Cindy can run with the enthusiasm. We’re already getting great feedback. We want this movement to be as big as the hippy movement.

We ended having a conversation with the students.

One darling girl, she was called X, said ‘I’m scared to say it aloud’ if we stopped eating meat that would solve our problems on a global scale. It’s more harmful than fossil fuels. 60% of my carbon footprint has been eliminated immediately.

Theo said you don’t believe in progress [except in the art of living – that’s what civilisation should mean] but is it not true that scientific food production has rescued millions of people from poverty?

I do believe in progress in the art of living that’s what civilisation should mean.

And Theo, I’m just now giving a clearer answer to your question.

Malthus laid out his theory at the eve of the 19th Century. His theory is if you do not control the population then the economy will rest on the poor who will die – food supply = number of people who need to be fed. During the green revolution of the 1960’s science seemed to demolish this theory using pesticides, irrigation projects (the irrigation projects are killing the farmers who export them, no food or water for themselves etc also GM production today leaves the land a desert.) Today there is massive poor and our science is used for war and has caused climate change (migrants!). Malthus rules, Hell on earth.

And one girl really made the case that however difficult, we have a duty to vote, but Vivienne says we should never do tactical voting. So where are we? If both ‘contestants’ are shit, what do we do? Hopefully there would be a green candidate, or another principled contestant.

A thank you from Tytus: 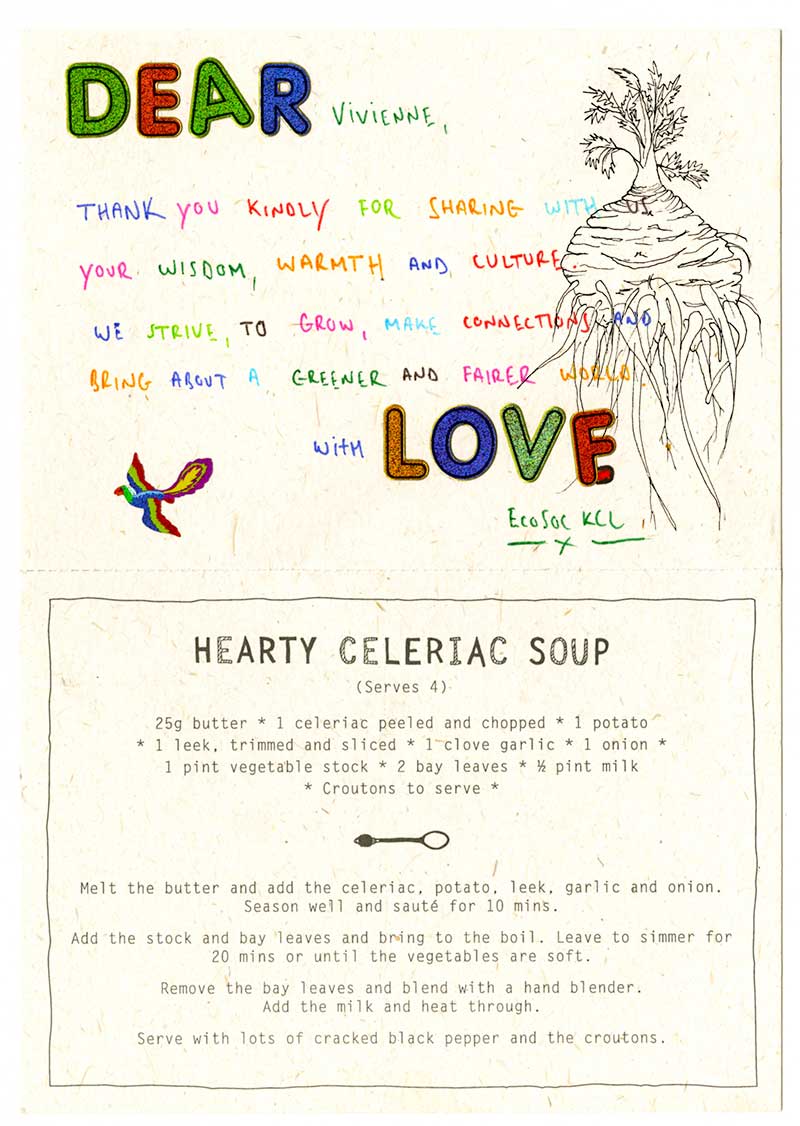 Speaking to students at Central St Martins, I made the point that in order to understand the world we live in and their place in it, black people should not feel they just have to exclusively explore their roots and I proposed that research into history and the history of art should be a search for past civilisation – because the moments of civilisation are not many, except the civilisation of China which did last for several millennia, one particular moment, was the hundred years in Greece either side of 500BC.

Right now, we live in a world of global decadence. I mentioned to Max that it is to be hoped that civilisation can grow with the exchange of different cultures. That he should read Chinua Achebe, a literary giant still alive, as to what happened when the white people took over Africa.

1600 seats at the Brighton Dome to hear my conversation with Caroline Lucas – A charged audience. Caroline afterwards told me what is going on right now with the conservative redrawing of the political map, splitting up green support by manipulating the boundaries of the constituencies.

Later, Inga from City Books gave me a present, E.M Forster’s 1928 book, The Machine Stops. She said ‘it’s the most important book that anybody could read, especially now’.

It’s science fiction, a utopia but really a dystopia. People live under the ground, each isolated in cells like honeycomb. They communicate by ‘Skype’. Everything is synthetic, even the air they breathe, all provided by the machine. Some of them go out, if they have a reason to travel, up a tube and into an airship. The air on the surface of the world would poison them and there are just a few ferns and grass.

The machine starts to break down and they get used to this and make excuses for the machine [they have no other way of life – The machine that feeds us is purposefully used to destroy us by means of Rot$]. However, the lady’s son did once manage to get to the surface and stay there for hardly any time at all. When the machine shuts down, she imagines that he’s with her trying to escape though they have nowhere to go, terrified by silence in a dark tunnel completely filled with poisoned air.

She said, ‘We’re dying, but tell me is it true that there are people on the surface?’

‘Some fool will start the machine all over again.’

‘Never, the human race has learnt their lesson.’

This science fiction myth is art, an imitation of reality, hopefully this myth could wake us up to the reality we face. Reality is always chaos, we can only understand it through art.