‘Armaments, universal debt, and planned obsolescence – those are the three pillars of Western prosperity’  Aldous Huxley 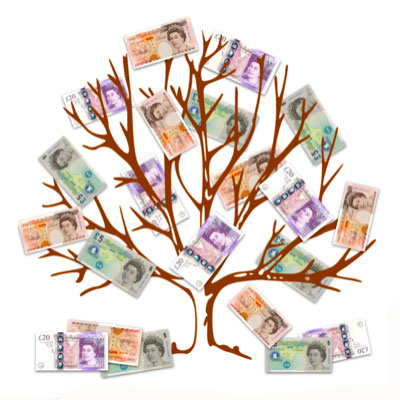 A trillion pounds is an awful lot of money.

Picture a gang of bank robbers like ‘The Lavender Hill Mob’, old school of course who still like to deal in cash. Imagine they manage to nick a million pounds in new crisp £50-pound notes, get back to their gaff with a couple of big suitcases full of the goodies and stack it up to share out. In a single pile it would rise 9 feet high, just about floor to ceiling, so quite a bit of work divvying it up.

Lucky for them it wasn’t a billion though because that would be a thousand times higher and rise up 5 miles into the sky and a trillion pounds would stack up a thousand times higher again. Those £50-pound notes would be five thousand miles high, up past the international space station and the satellites. That’s one reason really rich people never carry their cash – the other is because they’re tight and forever greedy.

In 1960’s Britain, there used to be something called our ‘international trade balance’. Governments would worry if we were spending more each year than we were earning. Worrying about the odd ten or twenty billion pounds a year seems quaint these days when debt measured in trillions is being bandied around.  It’s as if we’ve all been taught that borrowing to the max is good for us, as if it’s a natural state of affairs, something that will make us happy, that we should embrace.

John Maynard Keynes was a British economist whose ideas have had a massive influence on the economic policies of every modern government. He advocated increased government spending to stimulate demand and avoid economic depression. This loose money policy is now being promoted to extremes, particularly in the USA where they have come up with a new name for it, Modern Monetary Theory, which its detractors have labelled the ‘Magic Money Tree’.

Debt is a magical word to a banker because in all its many forms it is the bedrock of banking.  Government debt, company debt, consumer debt. Debt is treated as an asset by a bank, it’s valuable because it’s a promise to repay and that promise holds ultimate value.

And once it comes and sits comfortably on the bank’s asset account, like a modern conjuring trick debt can be used in miraculous ways. Above all it gives free rein to create with the simple click of a computer button what most people refer to as money, a process that many people once they realise the venality at work find appalling.

So, the process of continually ramping up the world’s debt burden is the driving force behind the modern economy. Interest payments just to service our debt in the UK are now approaching £50 billion a year, that’s about the same amount we spend on children’s state education.

In a world where money can be produced without restraint, where new debt is being generated on a colossal scale, and where interest rates are increasingly being engineered lower to accommodate this increasing debt cycle, the capitalist system finds itself hurtling down the proverbial rabbit hole. We have worldwide debt in a myriad of different forms and it’s making companies, governments and countries increasingly unstable. 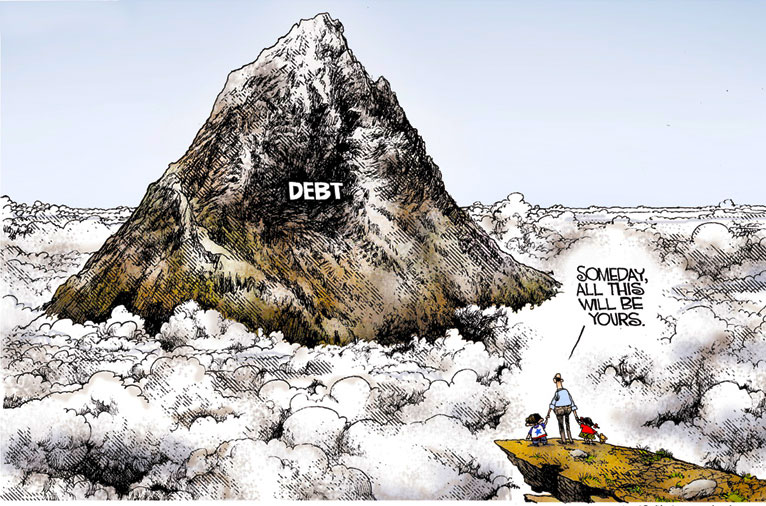 Shackling people to their debts is a process also used by rich countries, to rob and dominate poorer countries. It was brought to the world’s attention by John Perkins’ book “Confessions of an Economic Hit Man” who detailed how US foreign policy has been used to exploit cheap labour and to access natural resources without any regard for the local environment.

It’s an easy trick to accomplish. You find a poor country, preferably one of those defined by Donald Trump as ‘shitholes’ that have untapped natural resources. Like dealing with a street gang you suss the leader, the polished politician who runs the country, who always has a good story to tell his people. Then you get your economic team to propose a grandiose scheme that can supposedly help the country to grow. This will involve an enormous development loan from an institution like the World Bank, or USAID, the US Agency for International Development.

It might be for a new dam, an agricultural project with modern cash crops to sell, an airport, or new toys for the army – the list is endless. Then you produce a dodgy proposal to prove how this failsafe policy will help the country prosper but most importantly you make sure to include columns on the spreadsheet dealing with commissions, backhanders and kickbacks.

These parts of the contract will be paid direct into foreign bank accounts of the thug, his family, cronies, army chiefs and mistresses. Years later the country will have a wasting asset they never needed and a large external debt to be paid by a permanently impoverished population. The debt will be used as leverage against the country.

The Americans used this routine to plunder large parts of Latin America starting in the early 20th century with Honduras and Guatemala which were known at the time as Banana Republics. Now the Chinese have recently joined in the fun with their new ‘Belt and Road’ initiative to develop and control trading routes across the world.

In Sri Lanka the Chinese have built a deep sea port, an airport, a stadium, and a giant conference centre, all now lying empty and unused. Sri Lanka was unable to service the debt so the Chinese have magnanimously agreed to restructure the debt in exchange for ownership of the port for the next 99 years. Oh, and it just happens to be strategically positioned for their sea routes across the Indian Ocean.

Another aspect of debt is the CANTILLON EFFECT named after Richard Cantillon, a French philosopher living in the 18th Century. His basic theory was that who benefits when the state prints a bunch of money is based on the institutional setup of that state. In the 18th century, this meant that the closer you were to the king and the court at Versailles, the more you benefitted, and the further away you were, the poorer you became.

The reason is because money has to travel through institutions, and right now, the institutions for the powerful function well, whereas those for the rest of us are ramshackle and broken.

An example of this would be the four major US airlines who recently held their hands out for financial help when Covid-19 struck. They needed the money to stay in business, to keep people off the dole queue, to help their politicians get re-elected. But they conveniently forgot to let everyone know what they’d been doing with their earnings.

In the 10 years before the virus hit, they managed to plough their way through $50 million. This went in share buybacks to boost their company share price, it was paid as dividends to shareholders and it went in higher management salaries and option payouts. Lo and behold, $50 million was exactly what they asked for and were duly given.

Of course, they could have used their earnings to invest and prosper their company, to pay their employees more, to keep some reserves in the bank, but as usual the insiders grabbed the goodies while it was swilling around the system.

And there are many similar corporate rescue stories all over the press in the last year. Zombie companies with their corporate begging bowls out and no prizes for guessing who’s going to eventually pay for all the largess.

Barack Obama said “I found this national debt, doubled, wrapped in a big bow waiting for me as I stepped into the Oval Office”

We no longer live in a capitalist society; our economy is now simply ‘financialised’.

It’s a world where people are coerced into buying ever more stuff, where zombie companies are supported well past their sell by date, where the world’s resources are used without thought to our children’s future, and most importantly where a growing inequality between rich and the poor is fracturing our society.

How did we ever let such an unequal society arrive, we have all the skills of modern management, computers to spread information and ideas, robots to take on the drudgery of our industries and yet we still arrive at a point where the richest 1% have grabbed the bulk of all that the world has to offer humanity.

It comes down to raw unadulterated greed, complicit gutless governments, and most of all a corporate sleight of hand always operating below surface in the rich waters of a massive, unchallenged growing pool of money.

But do remember that the numbers always sit there unmoving and silent, the debt has to be repaid, always……whether by the debtor or the creditor.

There really is no magic money tree!

MONEY NOTES 1 – MASTERS OF THE UNIVERSE

MONEY NOTES 3 – JOINED AT THE HIP