Speculators: London is being crammed with high-rise luxury apartment blocks which are empty.

My husband described the young rich mothers who meet for coffee in Clapham, where we live, after dropping off their children to private schools. They wear smart keep-fit clothes with £2,000 handbags. He hears how they sold their family townhouses across the river in Chelsea for £10m, and now live in Clapham in a family house that costs £2m.

Poor people in Clapham! A family near to me are being evicted after 35 years – by the Council!

So they can sell their home. The Council are coming at this from two points: central government has cut their funding in half (austerity); they are taking advantage of prices in the rocketing house market (breaking up communities, short term thinking, storing up trouble for the future). Since Margaret Thatcher scrapped the Landlord and Tennant act, landlords have been able to evict tenants easily with short notice. People are told: whoever cannot afford to live in London should get out.

The English background: I refer to England rather than the U.K. because England has the dominant ethic. England has perhaps more prestige than any country in the world. The Bank of England is in touch with all world banks, able to trade 24/7. Historically it had the British Empire, a vast market whose wealth it exploited, which it handed over to the monopolies, via the U.S. and its organizations – NATO, WTO, etc. It is the best friend of America, the greatest power in the world. England taught America the tricks of propaganda (we are good, therefore you must be bad) and death-dealing. The world speaks English.

London, New York and Tokyo are the three main global cities. Paris and Frankfurt are not quite as important. The idea used to be that with technology people could work from home and our accountant could live in India. But at a certain level, people – managers, art directors, planners and policy makers need to meet face to face. This is a headquarters which needs its infrastructure- restaurants, wine bars, Filipino nannies, French nannies, artists, galleries, clubs, gyms. This is how London grew into the clean, flashy, rich, trendiest place to be on earth and ever more cosmopolitan.

For speculators London is a safe place to be. It is protected by the (at present invincible) corrupt political/financial system – based on what is now runaway debt. Our Conservative – coalition government is the pet of the private central banks that control and manipulate world economy. In their five years in office the government borrowed £70 billion which doubled our debt.

Our government’s top priority is to help speculators but there are few assets left to invest in because these assets have been based on exhausting the finite treasures of the earth. So assets have to be invented e.g. re. Fossil fuels: investment portfolios express assets at 100% of all available fossil fuels yet if we extract more than 20% we will all be dead from global warming. These are now considered frozen assets and speculators are divesting. Now that debt has run out of control – the poorest in the privileged world live on debt – speculators have too much spare capital, from interest extracted from other people’s debt. And they have to find ways to invest it.

The London housing boom for speculators is another invention. The houses remain empty so that means they are really worthless, until people live in them they have no true value. The government might as well issue bonds which say we will build an apartment block so no-one need bother to actually build them. 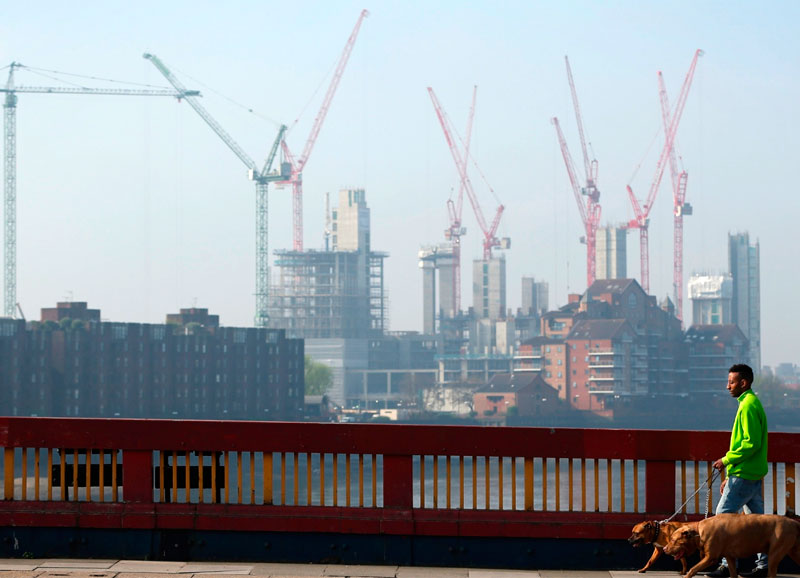 A view of the Nine Elms redevelopment, which is getting a £2bn transformation into luxury flats. Photograph: Dan Kitwood/Getty Images

Meanwhile London is a disaster. What was once Chelsea Barracks – home of the Grenadier Guards is now the largest most expensive hole for building on earth – owned by the Saudis. The skyline is not yet filled, for everywhere they are pulling down the old buildings – grand houses along Piccadilly! – And building the towers; there must be a floor completed every five minutes. There are cranes everywhere. Their red lights fill the sky at night.

In Oxford St. the road was closed but I went through on my bike. London is terrible for road works. Unlike other cities all the pipes and cables are underground, so they are constantly being dug-up. In Paris they use the sewers and in Milan the cables and wires are high up. Now there is the added closure to traffic from demolition/construction along the streets.

I was looking for a street leading into Soho Sq. where I could eat vegetarian Indian food and there on the street was this giant square hole. I thought the square had gone and went down the side of the hole through a corridor hung with blue plastic sheets under the scaffolding and emerged to discover that Soho Sq. was still there. Luckily.

People hate it. Everyone hates it. Stop the destruction! We don’t want this giant rubbish. All the houses where people lived happily, even in one room amongst the thriving town, are going, going, gone: clubs and dives, gone or moved out. There’s a space near our studio and next to the Royal College Sculpture department next to the Thames with a lock and boats and bars and meetings and table tennis tables and boxing – buildings with tiled staircases, once warehouses, now offices and theatre. Goodbye Doodle Bar!

In Brixton black people demonstrated claiming racism because their homes are going and they can’t afford a place to live. Russell Brand successfully helped women who refused to leave their rented homes belonging to the Council. Yes that’s the idea. Pull down the social housing. Yet all the political parties are promising to build houses because there are so many who need a home. Short-term economy! Napoleon said, “The English are a nation of shopkeepers” He meant they’d sell their grandmother.

Smashing communities, laying up trouble and expense for the future. What can we do? Politicians are criminals. Vote for who you believe in. Tactical voting is rubbish. After the election, fight for every issue. Demonstrate. Build the public debate. Talk to people. The social media can help to build a wave of opposition to government crimes against humanity. Talk, talk, inform yourself. And most important show your face: Demonstrate. Build the opposition, see what happens – take it from there.