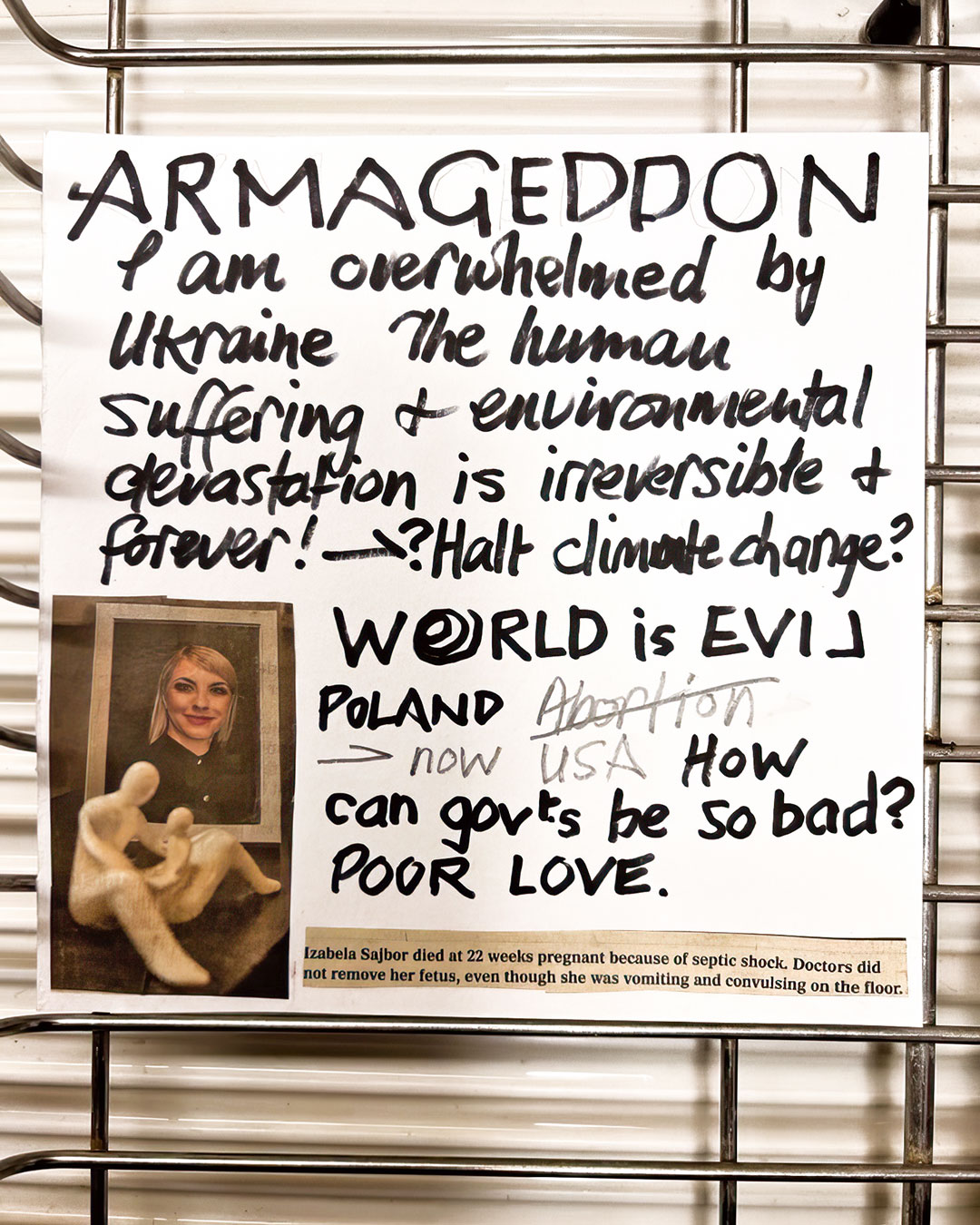 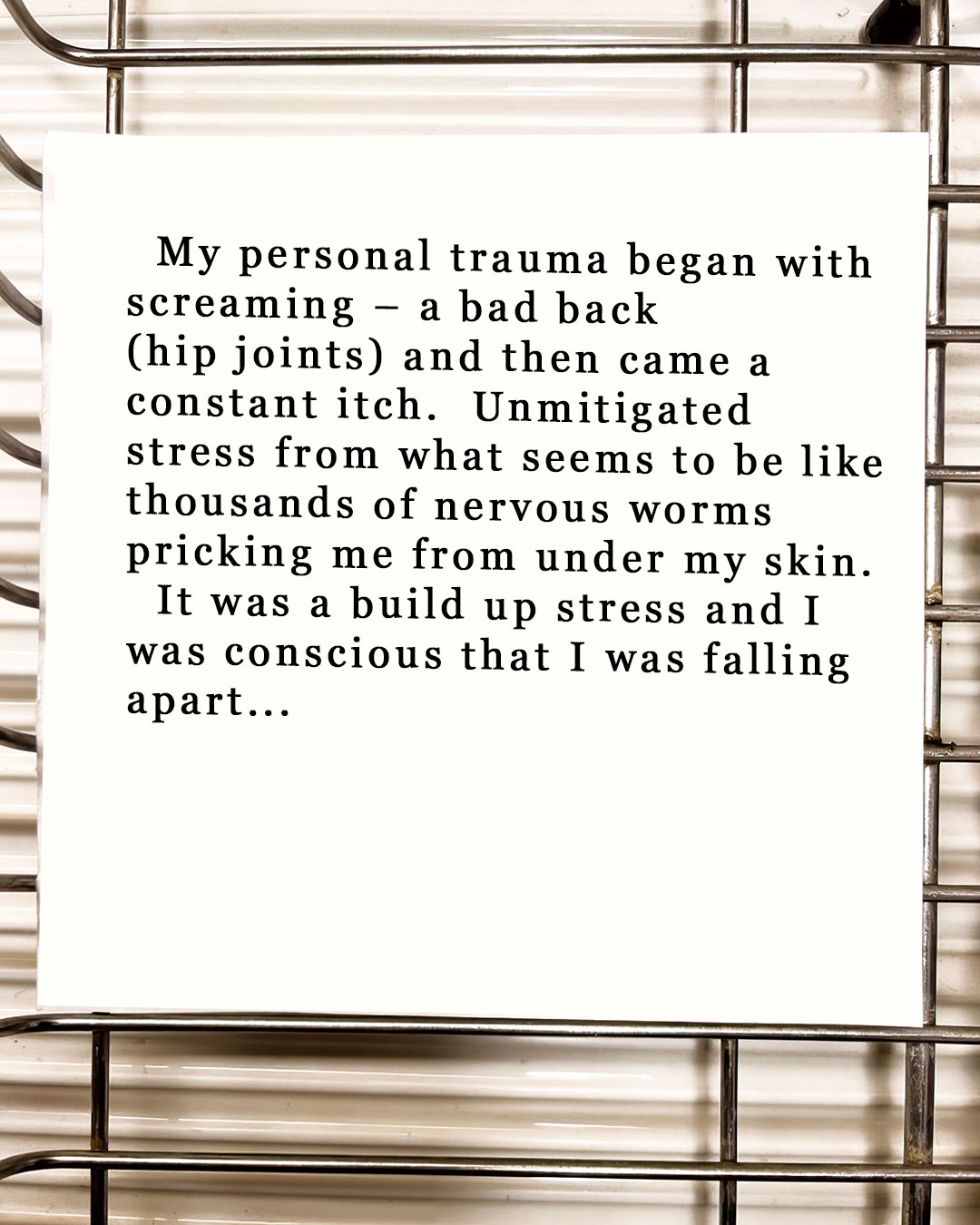 Armageddon means war of the worlds, it’s the Book of Revelation which is the vision of St John of Patmos and includes the 4 horsemen of the Apocalypse: War, Fire, Famine, Death. (Apocalypse means revelation.) It must have been written at the time of the Roman Empire and slaughter. Maybe he really did see the future, now that it’s global. The problem is, since civilization began we’ve always had a war economy.

My personal trauma began with screaming – a bad back (hip joints) and then came a constant itch. Unmitigated stress from what seems to be like thousands of nervous worms pricking me from under my skin. I work mostly at home. I spend more hours of the day thinking, making notes, reading and then usually Colette comes to my house and I dictate. At the moment, I’m preparing my new fashion collection which means I need to go to work more often.

I spent a day working with my old friend Joe on the computer, transferring design for printing. As you know, the computer takes time to show the results but I was happy because we were doing great things. Nevertheless, I was under stress because of my back and my itch, and somehow I had the idea that I was tired of telling people what to do. The idea formed that everything I’ve been doing in the last 10 years has raised awareness but that’s not enough.

The politicians are the cause of all our problems and it’s only politicians who can put my plan into operation – the very people who created the problems in the first place. It was a build up of stress and I was conscious that I was falling apart. I did a lot, I got home late. My thought was, I never want to spend another day like that again.

Across the media nobody got the message, “capitalism has to go!” There is a solution: we have to transfer to NO MANS LAND which is a land based economy (land is the only wealth, everything we make or do comes from use of land) and most importantly it gives a fair distribution of wealth and equal opportunity. You can’t have democracy unless you have that.

the wrecking mantra. All you need to run an economy is cash flow. We’re at a point where capitalism is so run down that all these industrial dinosaurs are completely subsidised by the tax payer.

My plan depends on halt climate change and transfer from capitalism to NO MANS LAND. So now I realised, my emotional trauma is caused by Ukraine.
Last week’s post

it was so clear that the suffering and the environmental damage is irreversible. That means no chance to halt climate change. When I look back over my last 10 years of trying to raise awareness and to fundraise for environmental causes, I was floored by the knowledge that I’ve not had one success. Only the politicians can do that. I will go on fighting, in case we still have time.

Where I am now is that I am in emotional and physical trauma and this is all underlaid by my despair for Ukraine – the damage is done. My lumber area still hurts e.g. it’s difficult for me to pick a piece of paper off the floor. I feel my whole skeleton and structure is under stress. If I go for a walk, my waist starts to ache, the problem is I’m trying to hold up my whole torso. It’s like a box and I can’t breathe well and every breath is an effort. Holding myself together is the medical response to having a breakdown. I have an appointment with my doctor, by the time you read this, I hope she’ll be able to work something out.

I need to get hold of Caroline Lucas because the time is ripe to get the Green Party to take this on. I feel she’s the only politician who can help and it would be good to talk to Sharon from Unite at the same time. Meanwhile, I don’t follow the internet and I depend on Colette to tell me what’s going on.

Front page article from the The New York Times ‘My Life is in Danger’: a young Polish woman 5 months pregnant, told by doctor’s that her foetus would either die in the womb, or if it would be born, it would have only a year – serious abnormalities. She wanted to get an abortion abroad but then her water broke. She was writhing in agony on the hospital floor, but the doctor’s legally were not allowed to help her give birth or remove the foetus. A 5 month old foetus can’t live, but the doctor’s were not allowed to remove it or help her give birth. She was buried with the foetus inside her. I asked Andreas: did you read it? He said, “it’s mad”. “No, it’s bad. How can human beings be so bad?”, I said.

What is going on in the world – America has now overturned Roe v Wade and so the campaign against human rights has begun with women. People realise the world is evil, there is massive dissent. What’s next, LGBT+ rights? We hear that Boris, England now wants to get out of the UN court for human rights. Will he be in time to prevent them stopping the extradition of Assange? 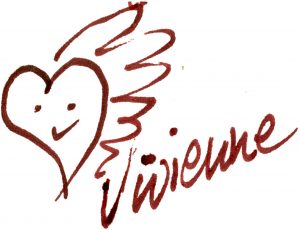