I’m starting the diary not with Clapham Common but with Egdon Heath. My friend Sharon wrote – she is a Buddhist nun, her Buddhist name is Dechi Palmo Dechi for nun – I’m going to call her Dechi Palmo from now on instead of explaining all this. She used to by my assistant and modelled in my fashion show Punkature, the same year she then became a Nun.

Dechi wrote how her favourite books from my list to Cora, are The Return of the Native, which opens with Diggery Venn the reddleman walking over Egdon heath, and The Mill on the Floss – they’re my favourites too. The vision of the Egdon heath impressed me forever, and Maggie Tulliver, the poignant love for that child of pure goodness – that too.

I chose the 19th century novel as an anchor: outstanding remarkable block which fills the 100 yr ethos from the end of Napoleon 1815 to WW1 1914.  Cora is 22 + the age at which I was reading this. Another time block is the genius of Shakespeare. Read his plays. The Renaissance reached England by the time of Elizabeth:

‘Oh 4 a muse of fire that would ascend the brightest heaven of invention’ ~ Henry V.

Shakespeare was that inventor who transmitted its ethos to the world. Read Marlowe too. I read a terrific book, Who Killed Kit Marlowe? By Terry Deary. How just a handful of Elizabeth’s intimates ran the whole politics.

My greatest treasure is An Anthology of Chinese Poetry by David Hinton. The Chinese poetic tradition is the largest and longest continuous tradition in world literature, stretching from well before 1500 BC almost to the present. Reading it, I have become a Taoist, I already

Chinese painting 2 the point of worship.

This is what I mean: the imperative to the painter is “catch the cosmic rhythm”. I realise that mind (energy) and matter (structure) R the same evolving tog. + travelling at diff. frequencies. By this I believe the underlying principle of the cosmos is rhythm, the rhythm of the cosmic void. – Which humans experience as the life force.

Bertrand Russell (1872 – 1970) the mathematician philosopher + activist taught in China in the 20’s. His book, The Problem of China deals with warlords fighting each other for power. How will the politics of China develop, how can it protect itself from the War Machine of the West? He talks to his students + young people as to their aspirations + hopes for a New China. The most important features of the traditional Chinese civilization R: “1.) The use of ideograms instead of an alphabet in writing; 2.) The substitution of the Confucian ethic for religion among the educated classes; 3.) Government by literati, chosen by examination instead of by a hereditary aristocracy.” 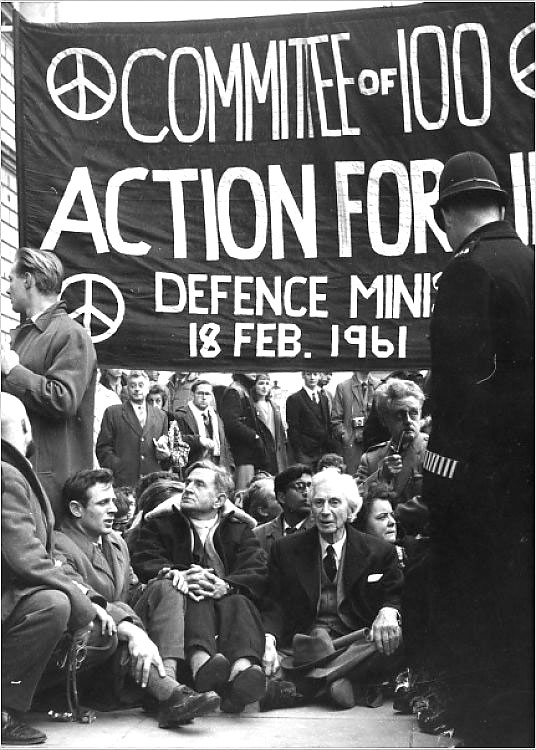 This resulted in a complete identity of culture throughout, a humanistic culture. Chinese culture was smashed by the English. Elgin, the one who gave us the Greek marbles, + his army wrecked the summer palace that represented to the Chinese the centre of the whole universe. The western powers forced opium on the Chinese, this was in order to sabotage their whole civilisation, the American family Roosevelt were opium barons. 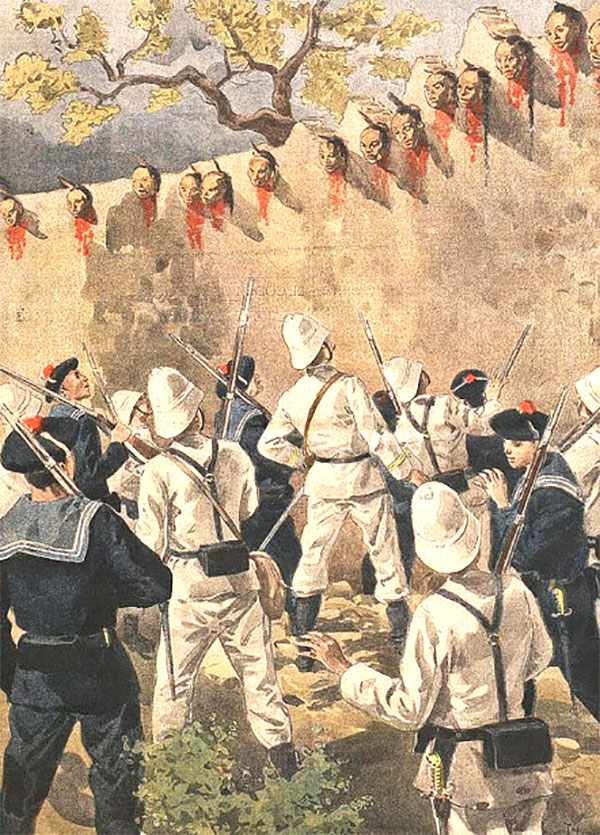 Fourteen heads of Boxers on the walls of Tchio-Tchao

Witness, the shocking defeat of the Boxer Rebellion – the rebellion which tried to stop the opium trade. Once the culture was smashed, this led to Mao Zedong. Russell’s book is very interesting, it deals with the time between the end of the empire and Mao Zedong.

A girl ran towards us on Clapham common; keeping her distance, she said that she’d begun writing a letter to us + how excited she was to suddenly meet us. “My name is Esme, the cacophony of silence is what I find most engaging and beautiful..”. She feels that perhaps the universe is telling her what she loves + cares about and willing her to act. I felt very close to her as she told a couple of little stories.
I’m a Taoist so I know she is experiencing ‘emptiness’. Inanimate things R empty – ‘inanimate’ means they don’t have a soul [inema is Latin 4 soul, breath, (also mind)]; this is what ‘animal’ means. Rivers + mountains R empty we impose our own projections on them. Tao has a metaphor: each life is an empty boat, lapped by waves, drifting along according to the current and flow. U should forget yr’self + let life take U. Don’t go out of yr way but explore yr deep interest. Yr c’hi is yr impetus, unique identity, Best Self: the spirit of the Cosmos.

She wrote: “The first piece of clothing I wore from you Vivienne, was the iconic black velvet corset, second-hand from my auntie. Auntie Yasmine would wear this with black punk biker boots, + a long black skirt which she would crinkle and crease under her bed before she wore it. I know she wore this to frolic in as a young woman in the 80’s, but the corset having touched her breasts as it does mine when zipped + formed around me, is all I will know of her interior experience when she dressed in this.” She asks me if I’m spiritual + I told her, the answers in this week’s diary.