Sat 29 Nov: After yoga I went to Omnibus across the road from my house in Clapham. Omnibus is the old library renovated into a multi arts-centre. It has been open, for a year and I got tickets for Macbeth. Tonight’s performance is the last and it’s promenade theatre.

I have wondered whether it is best to see Shakespeare when you have not read the play or to read it first. I read Macbeth at school and saw it now for the first time. Though you may not catch all of it you “get it”/know it. Because it overwhelms you emotionally you get it aesthetically; through feeling. And now, later, I am reading the play together with the notes to examine and research it more carefully. Next time I see it I will be more informed, e.g. I’ll know that “Graymalkin” is probably the name of a cat –“Malkin” being short for Mary and that “Paddock” is a provincial name for a toad. But I already guessed when watching that they were names of the witches’ familiars

Andreas and I met the other spectators at WC a 100 year old water closet located at Clapham Common tube station, now turned into a wine bar. We were given those little lights you wear on a head band and set off onto the now dark common where we came upon the witches. 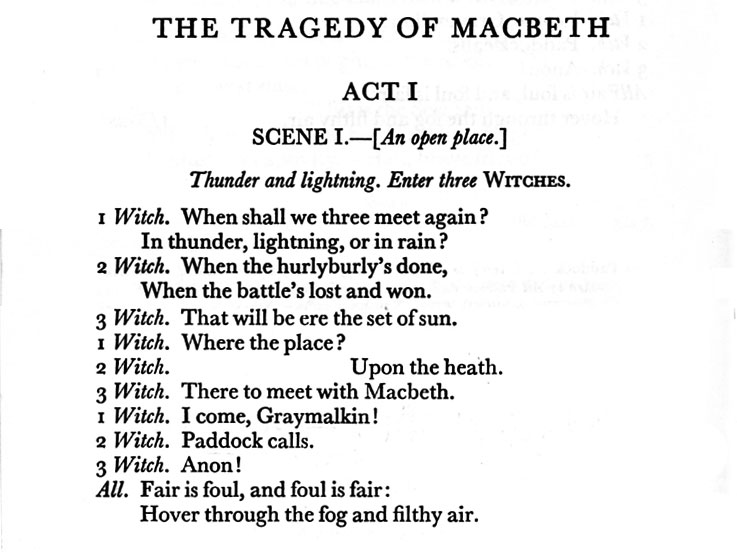 Then swift on to the next scene – King Duncan’s camp.

Get the drama and the economy of the poetry. The wonded man tells of the deeds of the hero of the battle, Macbeth.

Now onto the empty paddling pool, where we again meet the witches who have a fire there- all muffled up and chanting their plot as they await Macbeth and Banquo. One of them rode a scooter round the rim of the pool and had a sheet of plastic hanging down from under her bomber jacket by way of a wind break.

Here we have an example of the equivocation which runs through the play- equi-vocal: 2 equal voices because what seems good may well be bad. Macbeth is already Thane of Glamis; when the witches disappear a messenger arrives to tell him King Duncan has also made him Thane of Cawdor and now, to become king, Macbeth is already thinking of killing Duncan.

How deep is the psychology here at the end of the speech: Up till now Macbeth’s “single state of man” is complete and whole, his identity is clear, he knows himself for who he is. If he becomes a murderer his identity will disintegrate. Not only that – he will loose his grip on reality, if his anchor goes his world will shatter.

Then over the road to the library (now Omnibus) and round the back to the fire escape, at the top of which – as if on the battlements of her castle – Lady Macbeth was leaning, reading MacBeth’s letter. She was in her sleeping clothes, boxer shorts, vest and a white cotton short open wrap, smoking a roll-up.

The costume design was ordinary modern clothes but really thought through e.g. when Macbeth put on his armour he just slipped on a bondage-type soldiers harness – the kind you fix a back pack onto – over the clothes he was wearing and when he became king he wore an old leather bandeau instead.

It was really romantic walking over the common with Andreas and the others but now we were inside. I don’t know if promenade theatre is more or less exciting than theatre on stage but it was so well done and my concentration was at full power.

What made this play was the acting and of course Shakespeare’s genius. It was one of the truly life-enhancing theatre experiences I’ve had. I’ll always keep it. The casting too was well done – electric!

Macbeth was skinny and beautiful: she was little and tough. They convinced as a couple but I could imagine them as when they were teenage kids – sexual attraction and wild ambition. (Macbeth in his letter calls her “my dearest partner in greatness”).

I need to stop here and mention again something that strikes me when I explore the past: the shortness of life. People died young and infant mortality was high, so childhood was not important – growing up was: girls married young. Shakespeare himself retired in his early 50’s, perhaps to fulfil (in time) the life of a country gentleman. He died soon after.

This fact was in my mind when I “got” Macbeth. Before I had not been able to understand Macbeth – how he could do such a terrible murder. Now I realized- these 2 collaborators had to be quick and ruthless in their ambition to be great. And it was the sexual attraction and the fitting together in their acting that made me believe in them.

The economy of the action is dramatic and driven at speed by the originality of the poetry. Shakespeare enobles the characters; he speaks his poetry through their mouth and by this means we believe in the psychological foundation of their actions.

How dramatically powerful it is that Lady Macbeth, according to the beliefs of Shakespeares’ day can exteriorize her desires in the form of spirits. She invokes them in to enforce her ambition. 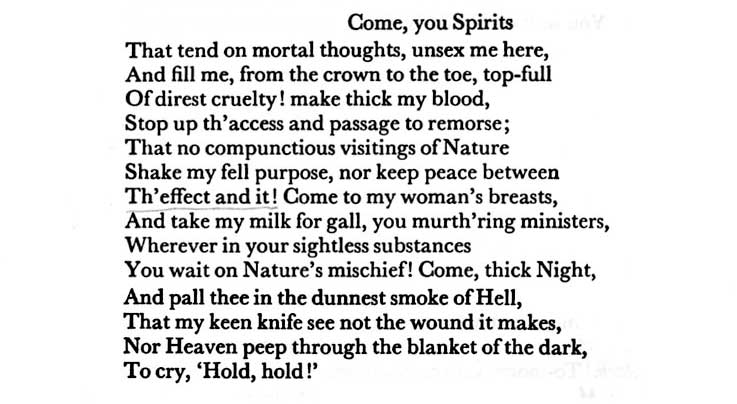 The strength she gathers, and by which she brings Macbeth to murder is her undoing. Her spirits are equivocal they unhinge Macbeth and drive her mad.

Linked to the theme of equivocation and underlying it is a deeper theme; it is a belief in the perfectibility of our human species – an upward transcendence. – What makes us human is our humanity. Murder is a downward transcendence, is inhuman,unnatural – against our true nature.

Macbeth wants to be king but balks at killing Duncan. Lady Macbeth appeals to his manliness- his heroic persona does the deed. He comes out of the bedroom appalled by what he has done.

Macbeth monitors his own progress in murderer but he can never reintegrate himself as a man (his single state of man). A murderer is a broken man, he can never complete himself.

In the middle of the night Macbeth will go to the witches to ask his future. In this scene Shakespeare and the witches will conjure a timeless moment of total suspense – you are held suspended outside time; time has no beginning and no end. By magic they conjure 3 symbolic apparitions; not of this earth, golden and bloody – who speak equivocation. You hear what they say but you don’t know what they mean. You thrill to the drama and if you get to the end then you will know who they are.

Macbeth is told he cannot be vanquished until “Birnham Woods shall come to Dunsinane”, his castle and that he cannot be killed by “man of woman born”. – But they are not exactly lying, they are being equivocal. Because the woods do move and he is killed by a man not born.

As Macbeth is awaiting the army which is coming to get him. He reviews his life of glory, adrenalin and violent action.

Why does this man of action want the time to go fast?  Surely Shakespeare is echoing Seneca (much read in his day). Seneca wrote a short treatise, On the Shortness of Life. He recommends that we engage with the past, through philosophy- become familiar with Aristotle: life is long if you know how to use it I would add: engage in culture through art. Have I not said that to absorb yourself in a great book is to live another life- add it to your own, double your experience. Life is short if you are merely consuming and chasing the latest thing. You have no anchor. 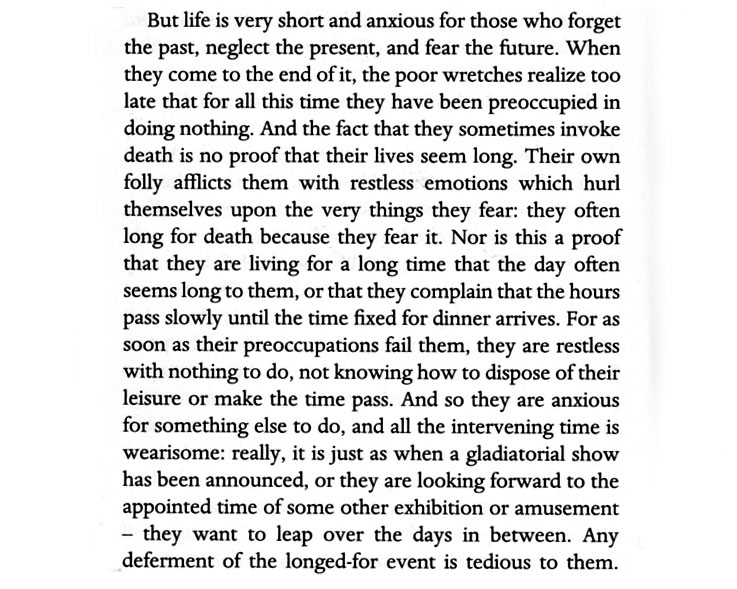 [Hamlet’s famous soliloquy, “To be or not to be” is the very foundation of philosophy: action= death/thought- contemplation = life] 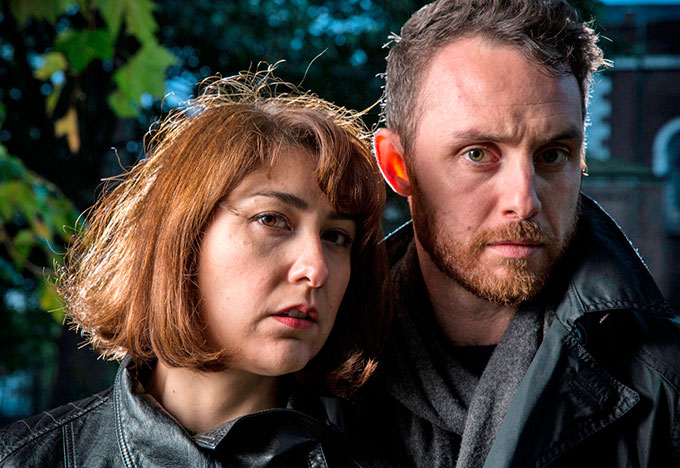 Gregory Finnegan as Macbeth and Jennifer Jackson as Lady Macbeth 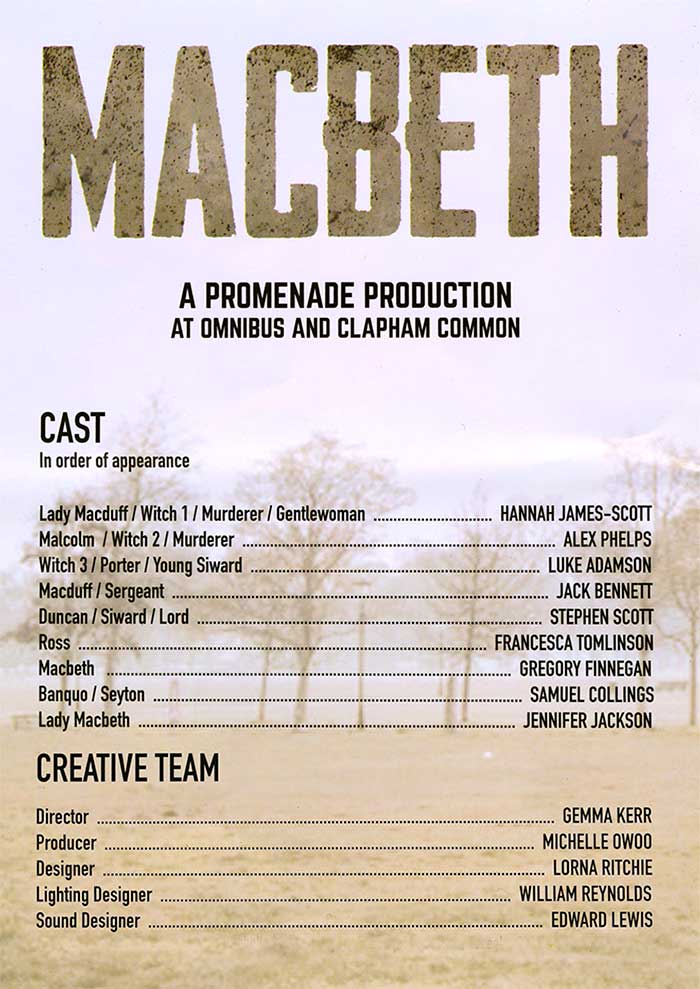